[This site attracts visitors from around the world, so what follows may seem a little parochial to some. Apologies, if so, but actually these are matters of wider concern in that Blair's support of Bush has global ramifications...] 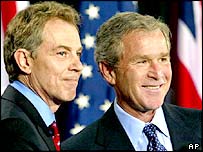 Here in Britain we are about to witness a General Election, which will decide the next government. 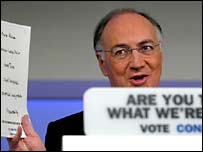 So, it will be business as usual then. Of course.

However, if Blair is re-elected, like Bush, he can claim his involvement in the invasion of Iraq has been vindicated.

The Spanish punished their warmongering leader by voting him out of office, & anything they can do...

Be in no doubt, in the forthcoming election, anyone who votes Labour is supporting a War Criminal. The conclusions of the Nuremberg Tribunal are unequivocal & by that standard Blair must stand condemned.

Not to accept that is to be in denial or naive.

Blair (& the mainstream media) may try to sweep all that tedious old Iraq stuff under the carpet, but informed voters should think long & hard before rewarding a party which aids & abets anti-social behaviour on such a global scale.

[PS: you could do worse than take that nice Brian Eno's advice & Vote Lib Dem this time...]

Mind you, one might legitimately question how much of a Democracy this is when we are never given the choice to vote about anything very important.

You'll notice that none of the main political parties are proposing to abolish capitalism, get rid of the monarchy (not to mention our own dear Nuclear Weapons, just other people's), or to take drastic action to avert environmental collapse...no, not on your nelly, it's just going to be more of the same, with a few minor options & nuances of style on offer.

And, remember what Bob Dylan sang:

You'd better get that in your head.

This world is ruled by violence

Blair (like his big buddy Bush) knows all about that. Challenged about the invasion of Iraq, he resorts to an end-justifies-the-means argument, which is as morally-dubious as the assertion that Might is Right.(Iraq may be better off without Saddam but it's NOT better off with over 100, 000 civilians killed in an illegal invasion & continuing occupation.)

Any election is based on COMPETITION, confrontation, conflict, when, surely, what we need is more CO-OPERATION & consensus.

Career politicians making a grab for power...it's not a pretty sight (though they try to prettify it, 'cos it's 'all about presentation', innit?)