(The Royal Family may not be amused but some of their subjects are! ) 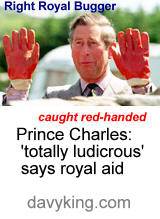 So what's the big deal?

The joke is on US because we put up with the whole Monarchy show. Surely it has now descended to little more than another long-running Soap which should call it a day like Brookside.

Then again, think of the entertainment value! Then again, switch channels. Royality is a dying brand which no longer deserves our loyalty (not that it ever did.)

Apparently Prince Charles sees himself as a 'dissident'. Well, if he's a dissident, then I'm....heir to the throne! (Hint: I'm not.) Why doesn't he show his true dissident mettle & renounce his princedom?