GRIST TO THE MILLENIUM

(Bugs, Mugs & Hugs, Our Raving Reporter Davy King tries to shrug it all off...)

To celebrate 2000 years of Christianity (it's only a rough calculation & someone did their sums wrong), a lot of people are planning to drink too much. This probably says more about people than about Christianity.

Of course, this whole Millenium thing is a massive Marketing Opportunity; commemorative knick-knacks, tacky souvenirs & kitsch memorabilia, to be sold by the lorry-load. There will be a multitude of Millenium Mugs (in every sense of the word.)

Millenium Bugs also pose a threat. Ants, mosquitoes, millipedes, choose your creepy-crawly.(Personally, I've always been a Beetles fan.) The computer variety, a hi-tech insect this, may yet do more damage than a biblical plague of locusts. Bring on the e-DDT.

Hugs, kisses, greetings & Best Wishes for a Happy New....Year/Century/Millenium? (A multiple choice question where for once all three answers are correct.) Just as well it's only once every thousand years. You'll soon get tired of the forced smile & general revelry when you realize that come January 3, it will all be no more than the memory of a collective hallucination, a hazy dream, & you still have to pay the bills.

Perhaps it's best to throw away your calendar, disconnect TV & radio, & carry on in blissful ignorance thru the entire shebang, till the rest of humanity resumes business as usual.

What will you be missing anyway? There's a certain inevitability about the proceedings.You know, the usual sort of thing: Crazy Karaoke Auld Lang

Syne (the Remix) will feature somewhere, most likely sometime just after midnight, as will a man (I mean person, but probably a man for aw that) in a kilt blowing the bagpipes (the latter is an unchanging Law of Physics, though we know that in a Quantum Universe such a notion is absurd, as is a man in a kilt blowing bagpipes.)

Later still, life will imitate Art, as much of the population wakes up on January 1st in something closely resembling Tracy Emin's Unmade Bed.

By that time an estimated million or so Millenium Babies, latterday Midnight's Children, will have been born live on the Internet, their happy faces reproduced on front pages of the world's cheesier tabloids to be enjoyed over the Morning After's breakfast (causing more discerning readers to gag over their baloney.)

I mean, who needs it?

However, if you like grand gestures, what an opportunity for a symbolic & actual Fresh Start. New Millenial Resolutions are presumably 1000 times more powerful than the annual, easily-broken & forgotten sort.

After Millenial overindulgence at the mother-of-all global parties, maybe there'll be a lot of people who resolve never ever to drink too much again. Such a resolution might fittingly mark 2000 years of Christianity.

And so we have come full circle to the beginning of this effusion, a rather stale conclusion you might think. It's appropriate in a way because perhaps this Millenium Mania is all just hype & fuss over nothing much - literally so, a simple matter of a trio of zeroes in a date. Indeed there are many who say 'Y2K' but, being charitable & entering into the spirit of things, one might easily reply 'why not?'

(If your sound is turned on, you'll hear a fine rendition of 'Auld Lang Syne'. ) 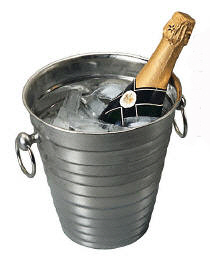 Whisky's risky but it gets you frisky...